Many an amateur hunter has made the mistake of just assuming all you need to do is load your gear and set out on a hunting trip in order to fill your buck tags. There’s a lot of planning that goes into hunting, and one of the key factors you’ll need to figure out is what the best deer hunting times are.

This can mean both the date and time of day. Read on, and never come home empty handed again.

The first thing you’ll need to figure out is when you’re allowed to hunt during the season. This varies widely from area to area, but if you look here you’ll be able to easily find the information you need.

You’ll note that seasons vary depending on what kind of weapon you’re using on the hunt. ﻿﻿Bows, muzzleloaders, and rifles will generally have different times in the season when you’re allowed to use them.

In addition, you’ll see that different times are allowed for public and private lands in most st﻿﻿a﻿﻿tes. The legal dates should always be your foremost consideration when you’re going out to hunt.

Game Wardens aren’t inclined to be forgiving just because you didn’t know the season, and the penalties for an out-of-the-season hunt can be quite stiff, sometimes ranging into five figures for a single kill as well as time in jail depending on the state in question.

As long as you’re legal, it’s time to decide on when you want to go out. There’s a reason that the stereotype of hunters leaving while it’s still dark out exists: deer are crepuscular. This means that they’re at peak activity levels during dawn and dusk. Try to arrive before dawn, you’ll be able to set up and have a much better chance of making a harvest that way.

Dusk is also a great time, but it’s best to maximize your chances by arriving in the early morning and then staying all day.

It’s absolutely vital to observe these times, you might spot a deer during the middle of the day but this isn’t the time they’re most active. An active deer is a busy one, and it’s less likely to notice small mistakes you might make while you’re stalking or sitting in your stand.

There is one exception to this recommended time, and that’s in the middle of the rut when your quarry will be extra active.

We recommend you aim for getting to your area an hour or so before sunrise, which will leave you ample time to get set-up and check your equipment for the coming hunt. We don’t just mean to start the hunt either, you should be in your stand or near your designated grounds by this time.

A lot of hunters are weekend warriors, and public land will have huge amounts of hunting pressure placed on them since everyone with a rifle or bow and a tag will be out there.If you can manage to get the time, there should be much less traffic in the middle of the week.

Hand-in-hand with this is the fact that you shouldn’t be afraid to get too far from the car. The farther out you are, the better your chances of finding somewhere without another hunter around. Remember that deer instinctively avoid hunters, and the more of you there are the more amateurs will be making loud mistakes and announcing your presence

As stated above, it’s not vital if you’re hunting on a friend’s property but if you’re forced to use public land this one little trick is mighty helpful. Not only will it increase your chances of finding deer, you’ll also be left to enjoy your hunting with a lot more peace.

While the lunar cycle isn’t something you want to rely on by itself, you can use it as part of your overall timing strategy. Every little bit helps, and you should definitely account for all variables while you’re setting up a hunting time.

The old theory was that the full moon allowed the deer to see better and thus they’d be out to feed later at night than normal.

This has been found to be quite untrue, while the bucks and does can see better so can the animals that prey on them. Whitetail deer are very wary creatures, and they know they can be more easily seen in the light of a full moon and become more cautious during these times.

However, the full moon is usually followed by an increase in feeding activity the next day. This means that your morning hunts have a slightly better chance when the night after a full moon.

The new moon has the opposite effect. The deer eat more boldly during the night, and they’re less likely to be active during the next day.

You’ll find that this isn’t a make-or-break type of deal for your hunting if the only time you can get out is after a new moon then get out there. If you have the time to make sure that you’re only hunting when you want, however, make sure that you take Luna’s light ﻿﻿﻿﻿﻿into account.

The weather is going to have a huge impact on the ﻿﻿movement of deer, for obvious reasons. In fact, the weather is the second most important factor to take into account in most hunting situations.

Related: When Do Deer Move The Most – How To Know The Movement Pattern Of Whitetail Deer

This isn’t quite as simple as it sounds, though. There're a few key factors you’ll have to take into account.

The key factor here is actually barometric pressure, whitetails are able to readily sense dropping pressure and will increase their feeding rate during this time.

If you weren’t already aware, dropping pressure usually means bad weather is on the way.

The air temperature is another key factor at play. This will obviously depend on the area you’re hunting in, but deer move more when the temperatures are lower.

The thick coats and lack of ventilation make it easy for them to overheat once temperatures rise above average for the season, so they tend to stay put when the t﻿﻿hermometer rises.

Atmospheric conditions are also important. Deer seem to like fog and mist, as well as overcast skies and will be more active during these times.

They’ll also be quite active during a light rain, but their activity levels drop off sharply during heavy precipitation.

We know it’s quite a bit of information, but if you keep all of this in mind when you’re picking a day to hunt and your chances will go through the roof. 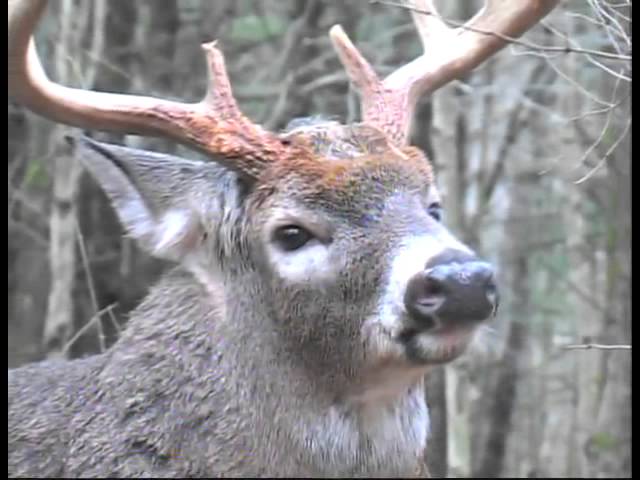 The rut is probably the most important factor of finding whitetails, and it’s surrounded with a myth and mystique by nearly every deer hunter. Tactics will change throughout the rut season, and each hunter has their own superstitions and barely-scientific ideas about when it’s occurring.

The reason the breeding season is so valuable to us hunters, apart from the antlers of course, is simple.

Even the oldest, largest, most careful bucks can make some mistakes during this time of year while filled with hormones and trying to breed that will let you take the shot.

Related: When Do Deer Shed Their Antlers? Want to Know When to Hunt For Antlers

There are plenty of different signs that the rut is b﻿﻿egi﻿﻿nni﻿ng , but you should be aware that there’s three “phases” to the rut.

In the pre-rut you’ll be able to find younger bucks quite easily, the doe aren’t in estrus yet and the youngsters are overeager to breed and will be found frequently bothering the females who aren’t ready yet. During this period, the more mature bucks will still be cautious.

During the rut itself, caution is thrown to the wind. The forest is alive with the clatters of antlers and even the smartest, most cautious buck is prone to making errors which can expose them to predators, both animal and human.

This is the ideal time for trophy hunters, as the elusive males will be present and less cautious than normal.

In the post-rut, the deer will still be breeding, but the excitement has worn off and they’ll be back to being elusive and cautious once more.

We hope we’ve helped you to figure out the best deer hunting times. It’s a lot of information to keep track of, but it’s the surest route to success in getting the buck of your dreams.

Once you have the timing down, though, the chances of finding your quarry go up exponentially. If you’ve been having trouble finding whitetails, study this guide carefully.

We hope you’ve enjoyed this article. If you want to show your appreciation or have any tips of your own, leave us a comment!