Editor’s Pick of the Year for the Best Turkey Decoy

Enticing a mature tom into your hunting rendezvous is one tricky task that does not only require the most reliable hunting gears and turkey vest, but it also requires the proper and efficient ways to use decoys.

This article provides all the needed information for you to consider in choosing the best turkey decoys. Also, we will be sharing our editor’s pick of the year among the five best contenders which we will review individually to help you have an easier way to decide which one to get.

The Essence of Decoys

Allure and interfere is the primary game plan of almost all bait users basing their tactic on the two main principles of decoys, and that is to gain attraction and to distract your desired toms. Attraction is critical as this will help you lure the turkey to your shooting zone. It allows you to get the attention of the toms and for you to prepare for the kill. Here, you can focus on the mating drive or the aggressiveness of the turkey to get their attention by using a hen decoy or a jake/tom decoy.

Decoys are very efficient to be able to distract your target since its full attention is directed to the decoy, making it a lot easier for the hunter to make small movements and get ready for the kill.

With these being said, it is only very imperative to know the proper placement of the decoys to maximize its full potential and essence. The goal is to place the decoy in a way which will not lead the tom directly in line with you, so you will have some room to make movements without exposing yourself to the target.

What to Look for in a Decoy?

This article aims to provide you the basic knowledge that you will need to choose the best turkey decoy for the money. Also, we will provide you our most honest turkey decoy reviews to further narrow your choices down. So, read on and learn the following factors.

This factor should be considered especially for those who will be hunting in remote and distant places. This will permit you to move freely and save energy while on the way to the hunting site.

Easy to set up

Most often than not, you will encounter a target which will require you to set up your decoy quickly. Thus, a decoy that does not offer complex steps will be the best one for you determine the fail or success of your plans.

Consider the Soil Type of your Hunting Site

Of course, everyone does not want to go on a turkey hunting trip bringing a decoy that does not fit with the kind of soil of the hunting field. Rocky soils require sturdier stakes that will not break upon setting up.

Since decoys are for attention and distraction, it is always best to use the most realistic one that can lure your targets. Turkeys, like human beings, are very particular with body language which provides hints to other birds as to their current state. Thus, the most realistic-looking one can lure other birds more efficiently.

Positions of the Decoy

It is always best to know what the specific positions of the decoy mean and when is the best time to use them. So, you might need to read the following discussion for you to learn this one of a kind knowledge.

1. The Head Up Position

Turkeys during early seasons are still very active when it comes to breeding and are obviously very vocal. Thus, a head up positioned decoy can be used during this season.

Head position can be perceived by other birds as a sign of activeness and alertness. This could mean that your decoy is looking out for other companions or is squeaking to find a gobbler.

This is very suitable for hunting sites with tall grasses, and hays since the relax position usually indicates a walking bird and these grasses and hays adds the illusion that the hunter is trying to create. A decoy, in a rest position but is not moving may appear unnatural to the bird and may cause mission failure.

This is best recommended later during the hunting season, but hunters may still opt to use it anytime. You can combine this decoy with the occasional clucking, purring or yelping to lure gobblers.

This decoy can be used in an area with many gobblers fighting for their territory so that it can create a natural illusion for your target bird. Using this decoy can either make or break your mission since it can result in a less dominant bird to back away and abort your mission or will go exactly as how you planned it to be.

This is highly recommended to be used in wide and open spaces since a combination of hen, jake and gobbler is expected to result in a more realistic view and a more enticing gathering for your target bird to join.

Above listed are the most common types of decoys used by successful hunters. Now that you have already understood their usage and the perfect time for these decoys to be used, it is about time for you to scrutinize the best five turkey decoys  in the market which we will be reviewing below. 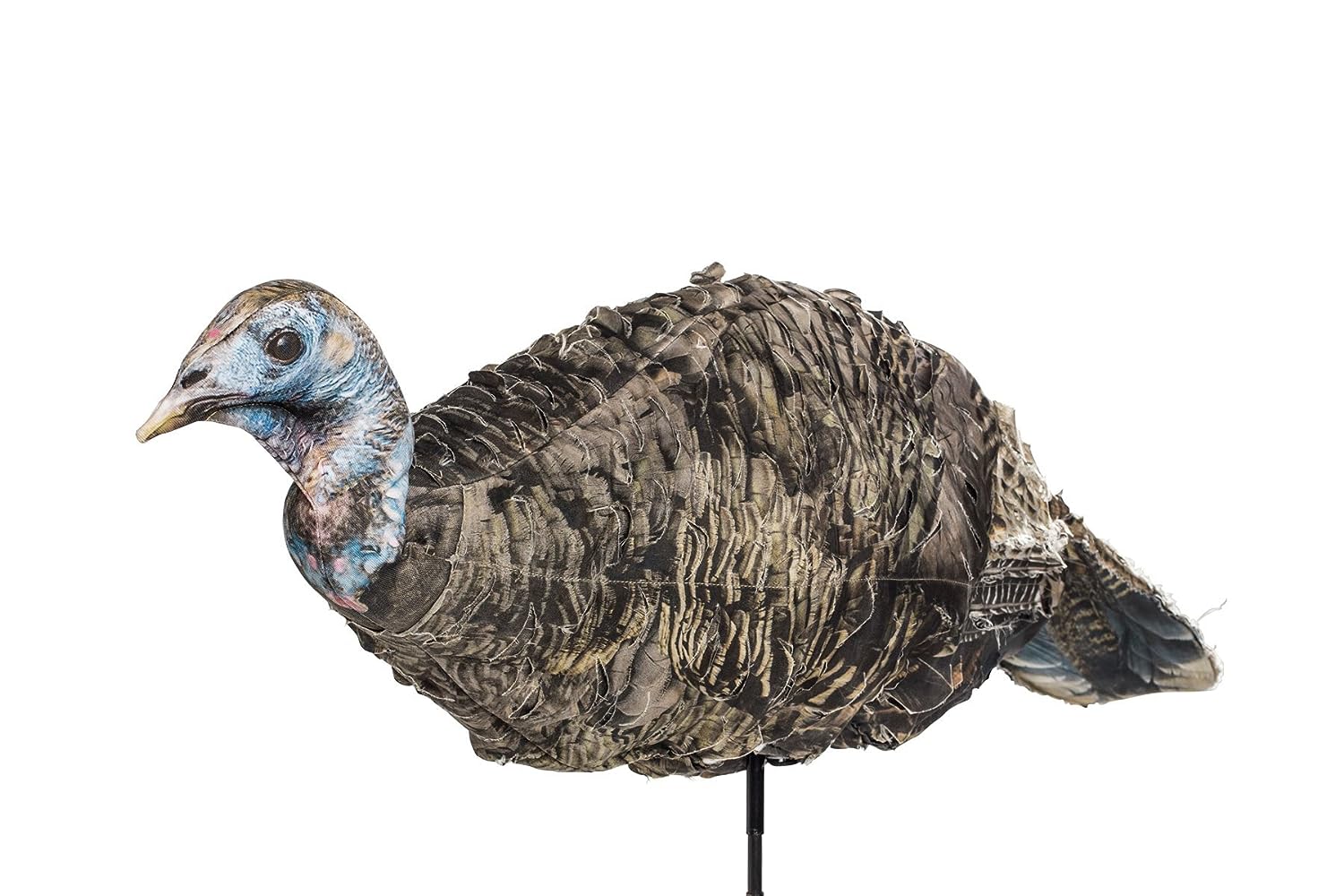 Miss Purr-fect decoys are known for its realistic features and poses making it one of the most popular decoys in the market all over the world. Upon looking at it, you will get a satisfying feeling that birds will be enticed with it. The general design and even the small details in its feathers are well crafted.

The best thing about this decoy is that it provides freedom to its user to adjust its pose as he prefers through the leg pole system. With this, the user can change the decoy to stand, to pose like it is nesting, feeding and among others. The wirings inside permits the movement of the neck and head making it very flexible to be adjusted according to the pose you set.

The Avian-X Breeder Turkey Decoy is one of the most lifelike and operative decoys in the market because of its Lifelike Collapsible Decoy feature. It guarantees a 100% realistic look through its very detailed feather that will surely lure your gobbler.

This provides a receptive position of a hen with plunged wings and in a squat position which entices a target thinking that the decoy is ready for mating. It is made with high quality and durability as it is made of Dura-rubber and promises longevity without wearing or denting.

Aside from its quality, this decoy also boasts its ability to be transported with ease and comfort as it allows its users to inflate and deflate instantly. It is also very easy to set up without any hassles and without the need for the hunter to waste his precious time.

Primos Gobstopper Jake and Hen Decoy Combo are well known for its incredible high definition and very detailed paint job which makes it realistic to look at compared to other decoys in the market. The best thing about this decoy is that it is very easy to be carried around because of its lightweight nature.

Also, it is very easy to set up making it very convenient for the hunter to focus more on hunting instead of working on a complicated decoy installation. Since this is a combo product, you can be assured that you will be able to save few bucks since you will be getting two decoys while paying only for one.

Just like all the other Avian-X series, this Lookout Decoy has an excellent and very lifelike paint and feathers that are professionally laid out. It can be stored easily as it can be inflated or deflated without any troubles. This has been well designed and well-crafted as it is made with Dura-rubber that gives assurance that its shape will stay amidst the inflation.

This boasts durability as it is made from high-quality materials and guarantees to withstand dents and wearing off. You can set it up on your hunting adventure hassle-free, and it will allow you to carry it with you anywhere because of its very portable and lightweight nature.

Its posture, looking like a lost hen searching for her man will surely excite your target tom to come running towards her and assuring your kill.

This decoy offers durability as it is made of Dura-rubber and its construction boasts a real-life Jake upon inflation. One can assure that this decoy will not be able to gain any punctures and dents because of the high-quality materials used to construct it. It is undoubtedly capable of surviving for years.

Its deflated form allows the user to carry it around with ease and comfort plus the cotton bag that it comes with. It is very convenient to use and set up anywhere adding comfort and ease to the hunter’s adventure. The design of its feathers is impressively well-thought of which results in a more realistic outcome making it a more efficient decoy.

These are the top five best decoys in the market which you can consider and you will not likely be disappointed with these five brands. Consider all the factors we have discussed above and choose the best decoy which has met all your preferences. The in-depth review we have discussed earlier will guide you to choose your preferred decoy without worrying and regretting.

Basing from the review we have discussed above, it is very evident that the Miss Purr-fect is the winner among the five brands. It has the most believable features that can surely attract the toms which is a great deciding factor for decoys.

In addition, I like the idea that it allows freedom for its users to adjust it according to the user’s preferred poses and its ability to move its neck and head because of the inner wirings which is a distinct feature of Miss Purr-fect that can never be found in other brands.

This article hopes to give you the most honest review and genuine guidance as you take this exciting world of turkey hunting. Thank you for taking your time reading this and we hope that we have fulfilled our promise of providing knowledge and expertise to our readers.

How To Aim A Pistol: How to aim your pistol like a sniper

How Should a Hang on Stand be Secured? Find out how to make sure your hang on stand stays