How To Bleach A Deer Skull-No Waste: 5 Simple Steps to a Beautiful Skull Trophy

When it comes to﻿﻿﻿﻿ h﻿﻿unting, one of the best parts for many of us is taking and cleaning trophies. Whether it’s a rack of antlers or a pelt, they make for impressive talking pieces. One of the favored of deer hunters everywhere is a nice, white skull.

It’s something of an involved process, but if you follow these instructions we can show you how to bleach a deer skull to a sparkling white that will leave you the envy of your hunting friends. 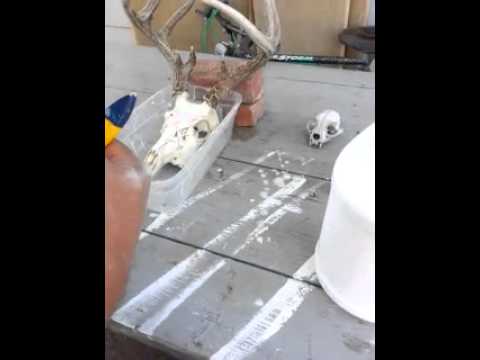 Make sure to gather what you need before you get started. Since the process will take a few days, we’ll list them in the order you’ll need them to give you a good overview of the whole thing and you can definitely purchase things as you go.

If you’re averse to boiling, you might want to look into deremestid beetles and if you’re not the type who’s willing to raise them yourself then there are services available online which can handle the cleaning process for you with them. You’ll definitely want to invest if your deer is a true trophy, as it reduces the risk of damage from boiling.

The hydrogen peroxide can be a bit difficult to source in large enough quantities and chemical suppliers are generally unwilling to sell them to private individuals. It is, however, used for bleaching hair and is available through hair product suppliers quite easily.

Do not attempt to use bleach in lieu of hydrogen peroxide, it will damage the bone irreversibly and makes for an inferior whitening agent anyways.

How To Bleach A Deer Skull- In 5 Steps

Before you can even begin the process, you’ll need to have skinned and scraped the skull to get it ready for the further preparations you’ll be wanting to do. Removing the head with a saw before preparation can make things rather easy, then remove the eyes and get to skinning and scraping.

Assuming you’ve cleaned a deer before, the initial part is quite simple but the scraping is a little bit more specialized of a skill. With a good knife, you can make short work of this task. Don’t worry too much about getting every little bit off of the bone just yet, that’ll be taken care of in the next step.

Your goal here is to get as much off as you can without damaging the skull in any visual way, so have at it and try not to scratch the bones.

Protip: You can skip this and the next step if you want by utilizing deremestid beetles, professionals who work with bones often opt to do this but it’s an entirely different skillset if you don’t opt to send your skull off.

Once you’ve done the rough cleaning, it’s time to start the process in earnest. You’ll begin by adding calcium carbonate to water at a ratio of ¼ cup per gallon of water. This can be a bit tricky of a process, but as long as you’re careful you’ll be good.

Bring the treated water to a rolling boil, but do not add the skull to the water while it’s at this level). Allow temperature levels to fall to a simmer and place the skull in the water for thirty minutes or so. Scrape it again, the flesh and hair bits should come off easily.

Once you’ve done this, use a hose to clear out the nasal tissues and brain and boil for another twenty minutes or so if there’s still tissue left. Don’t over-boil, this can damage the jaw, loosen the teeth, and have other unintended side effects which will make your trophy less attractive.

Protip: You can easily keep the antlers clear of the water by hooking them onto a board held over the pot. Use wood thick enough it won’t bend from a little bit of steam and you’ll be golden.

You’ll want to let the skull dry out entirely before this step, allow it to sit until there’s no moisture at all. It’s best to do this in the shade, although it will add some time the slower drying process can avoid damage to the skull.

It’s imperative to set up the bath in this instance without getting the antlers in it. Hydrogen peroxide can be a bit difficult to source in quantities, so try hair dressing suppliers. Anything from 12% down will work pretty well, higher concentrations aren’t ideal and are harder to get ahold of anyways.

Mix it 50/50 with water and allow it to soak until it’s reached a desired level of brightness, the bone will actually dry out and look a bit lighter than it does while wet. The process can take a few days, but don’t forget about the skull or you can damage it.

Once you’ve let the peroxide dry off, you can quite easily help to maintain the finish of your skull and antlers for a Euro-mount or whatever use you want to keep it for by applying a clear coat of spray lacquer.

The finish you want to go for will depend on your personal tastes. I like to use a matte finish to give the sun-bleached, untouched bone look but some will prefer to go with a gloss or satin finish which can result in a very attractive finished skull albeit one that’s obviously been altered post-bleaching.

This doesn’t just give your skull a nice finish, it can also help to prevent mold or anything else from getting into it and will keep air from yellowing the skull for a long time to come.

Many hunters opt for the attractive Euro-mount style after finishing their skulls off. The skull will be placed on a plaque, parallel to the wall and facing downwards in order to show off the rack.

Many hunters will opt to use a belt sander to level out the bottom of the skull and ensure a flush mount in order to maintain a perfect angle. You can easily attach it by running two screws through the back of the plaque and into the skull just be careful about the length and placement as you don’t want things to protrude.

A more creative mount can be made by slicing the front piece of a log out with the bark included, screwing the skull on, and then reattaching the front of the log to make for a round “post” style of mount.

We hope that we’ve given you some ideas on how to bleach a deer skull and what to do with it afterwards. While hunting strictly for trophies is often frowned upon, there’s no need to let any of the animal go to waste once it’s been harvested and with a few simple steps you can make an attractive trophy with minimal fuss and skills required.

Like our tutorial? Have your own methods? Let us know in the comments below.

The Best and Effective Steps on How to Adjust a Scope

How To Attract Deer: The Top Methods For Hunters

What Is the Best Hunting Slingshot? Top Rated Slingshots Reviews

Today’s Big Q: What is the Best Reloading Scale Review?

Kentucky Deer Hunting – How Do I Legally Hunt Deer In Kentucky?

How to Measure Draw Length – Acquiring the Best Archery Skills