Where To Shoot A Hog? (The Answers Will Make You Amazed!)

Whatever weapon you may be choosing when you’re hunting, it’s quite easy to alternate these firearms as their form and build are almost if not technically the same. On the other hand, the same couldn’t be said when it comes to targeting animals in the wild.

Take for example the anatomies of a deer and a hog. These animals differ in a way that you should be aware where to shoot them. For the latter animal however, it’s infamous for being quite tenacious to hunt and for that you must be equipped with the right knowledge as to where to shoot a hog

This entire article is dedicated to a single purpose — that is to know exactly where you can shoot a hog. These hog-hunting spots should also provide you reasons as to why these locations should give you a vantage point when taking down these wild hogs.

Where To Shoot A Hog? Shooting And The Hog Anatomy

Before we head right into these desired spots, it’s important to note that wild hogs are not deers and that whenever you’d shoot a hog with an aim you’d usually target a dear, chances are you’d end up with a gut shot — ultimately missing your chance on claiming the critter! Anatomically, the heart and lungs of a hog are situated forward and a bit lower than that of a deer. This is critical whenever you’d like to make a distinction between the two.

#1 The Spinal Cord, Brain Stem, And The Neck Shot

If you’re aiming for an immediate incapacitation or an instantaneous death on your target, aim for the hog’s spinal cord and brain stem. Meanwhile, a neck shot should offer you a larger target area as opposed to aiming for the animal’s brain only. The hog’s spine runs from the base of its skull all the way to its midpoint where its neck right above its shoulders is situated.

I’d highly suggest that you aim right below and to the rear of the ear of the hog. This is known to be a good shot and should bring any hog down that swiftly.

Some hunters would always go for the lung/heart shot. If you’re one of them, target a broadwide shot that aims for the forward section of the front shoulder and low in the chest. If penetrated sufficiently, this should give the hog a double lung and heart shot that is proven to be just fatal.

If you’re shooting from a quarter away, go for the exit in a way that your aim is for a spot that should cause the bullet to go through directly right in between of the front shoulders and in the lower part of the center of the hog’s chest. This strategy is especially notorious as it should give you a clean, lung and heart shot. Meanwhile, aim for the animal’s center of the chest whenever you’re wanting a head-on shot.

Realted: The Definitive Guide On How To Bait Wild Hogs ( #1 Tip Is Important)

Most hunters who don’t dilly-dally when it comes to aiming for the sure kill spot go an “ear-holes” shot. Deemed as the easiest target, the hog’s ear holes present a solid target that once you hit it, your target’s neck should break and effect a quick death.

On the other hand, hogs are known to be considerably mobile that moves their heads to varying directions. In this regard, targeting for ear holes can be quite a challenge. To weather this, observe a hog which stops for a long amount of time. When you happen to notice this, go right for the ear holes. And if these holes are just too difficult to target on, settle for the other vital organs that were mentioned above.

You can watch this video clip  to check on how it looks like to shoot a hog via its ear holes. 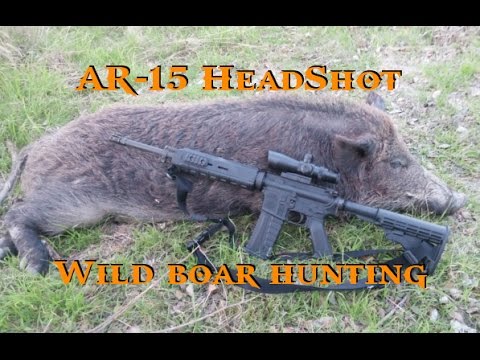 In this same respect, be very careful when you shoot the offspring of a sow. Any sane mother in this world can charge at you maddeningly if she sees you trying to hurt or toy with her brood.

Animals have varying anatomies and as a hunter you must be equipped and knowledgeable enough to know these information as this could determine the success of your hunt. The same logic applies to shooting hogs.

As their anatomy differs from deers, it should be your responsibility to know which parts to shoot. Any lack of this information thereof could derail your goal or worse, injure you in the process. Ultimately, arm yourself with the outlined tips above and remember that the most important thing in hog hunting is that you should kill it quickly and be safe!

Do You Know When To Plant Food Plot For Deer?

How To Cut Carbon Arrow Efficiently For Great Hunting