Get That Pelt! How to Skin a Coyote

When it comes to pred﻿﻿﻿ator h﻿﻿﻿unting, a lot of us have one thing on our minds: the skin. While most hunters will find themselves skinning and saving hides, there’s few trophies held in higher esteem than the pelts of predatory mammals.

Learning how to skin coyote and preserve the hide is as much of an art as learning to hunt the canines ourselves, and making sure that you do it properly is one of the most fulfilling experiences a hunter can have.

Related: How To Bleach A Deer Skull-No Waste: 5 Simple Steps to a Beautiful Skull Trophy

How to Skin a Coyote

If you’re planning on stripping the hide off a coyote, the best time to do it is right after you’ve made the kill. The membrane between the skin and muscle is much easier to break while the body is still warm and it’ll make the whole process a lot easier on you.

This means that you want to be prepared when you go out. If you’re hunting from a stand, for instance, you want to have an area nearby where you can skin the animal. This generally means either a low hanging tree branch or a sturdy fence post to tie off on.

These instructions are for taking the pelt quickly, not for taxidermy and mounting purposes which is a specialized art in and of itself, so keep that in mind. You can also drag them back to your vehicle and then move them back for freezing, but a coyote that’s still warm makes the task a lot easier.

For selling hides, the feet are basically useless. Instead of bothering with them, many hunters will cut the front and back legs off below the knee to make things easier.

Make sure to do this on a hard surface with a sharp tool in order to get a clean and quick cut. A log is usually your best bet, but most people will be able to find something in the field which they can work with.

If you don’t have a hatchet or a heavy machete then you can still proceed. Taking a s﻿﻿harp knife ring the limbs, being careful not to cut into the meat or tendon beneath the hide as that will complicate matters considerably and risks getting a lot of blood on your pelt.

Either way, you’re going to want to use paracord or something similar to hang the carcass now and get to the actual skinning. 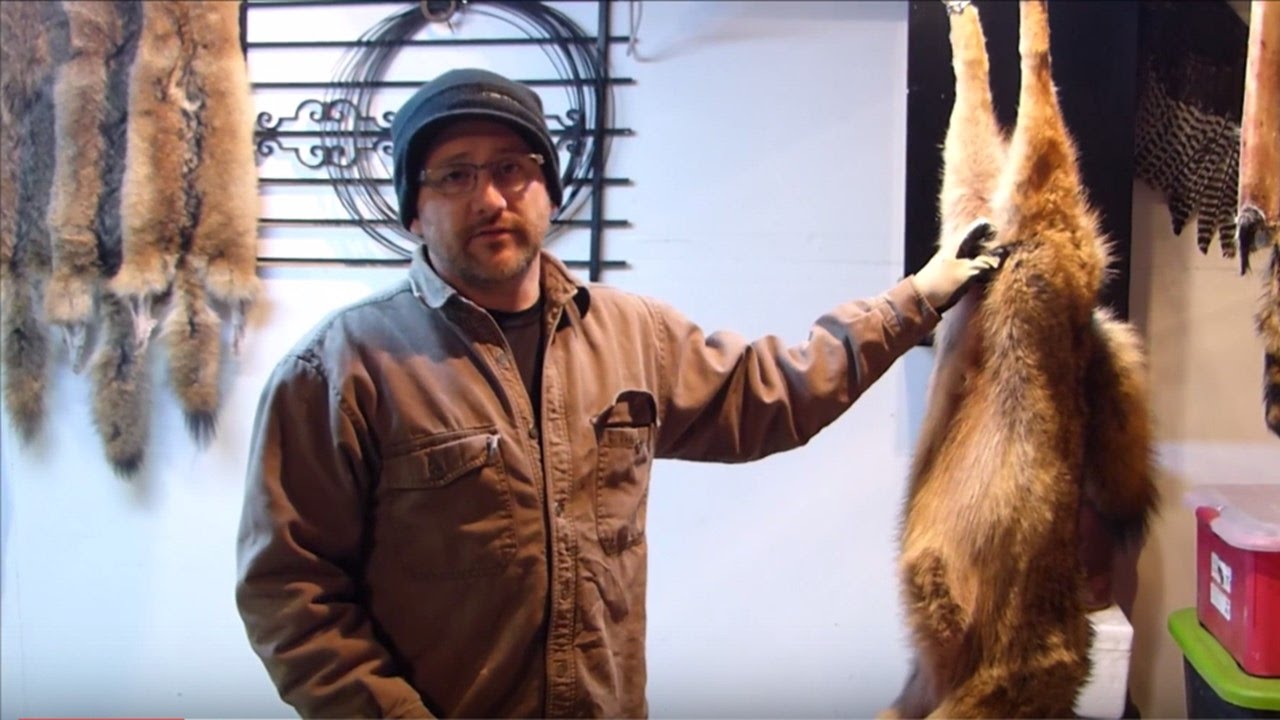 At this point it’s time to get cutting so you can remove the majority of the skin from the animal. You’ll make a cut along both legs and pass over the anus first. Depending on your preferred method you might want to rip the connective tissue out with your hands or probe ahead with your knife to cut it.

You should definitely be wearing gloves at this point, and be careful not to cut yourself. As scavengers coyote can carry some pretty nasty diseases and you do not want to make blood-to-blood contact with the animal.

After you’ve made the cut you’ll want to remove the skin down to the tail.

Removing the tail isn’t quite as tricky as many people seem to think it is, but you’ll need some specialized tools in order to pull it off.

Before you get much further you’re going to also need to finish cutting around the anus of the animal in order to make things easier.

The oldest method is to grab it between two pieces of metal rod after making an incision and removing the first couple of inches of fur. One person holds the rod and the other will yank out the tail bone out.

You can also do it by hand, but it’ll require a whole lot more effort than a lot of people are willing to put into it.

There are also specialty tools which can be used to remove the fur from the tail by a single person. For the most part, these will clinch up and allow you to yank the tail bone while you’re holding it shut.

Either way it’ll require a bit of grunt work, but once it’s done you’ll be able to keep the tail with the pelt which makes for a much better finished product. Remember to cut all the way along the tile in order to preserve it better during the final steps.

5.) Removing the Rest of the Hide

From here you’ll simply need to separate the rest of the skin from the torso. If you’ve already prepped the lower limbs it’s a fairly simple process, mostly involving yanking the skin downwards as you go until you hit the limits of the connective tissue then separating it again.

Some people, once again, will use a knife while others will just work their hands in. This will compromise the bulk of your time during the skinning process for the most part, but it’s a simple process and most hunters will pick it up in no time.

Then shoulder blades/arm pit area often prove to be quite problematic for people who aren’t used to skinning canines but there’s a neat little trick you can utilize to make the whole process smoother.

Once you get the hide pulled over this area a little bit you can take a wooden rod or a screwdriver and pass it between the arm and the still-attached hide. Push downwards on it and you’ll find it comes off easily enough.

Depending on how you prepared the forearm you may need to cut it some more to get the hide down around the neck, but you’re almost there! 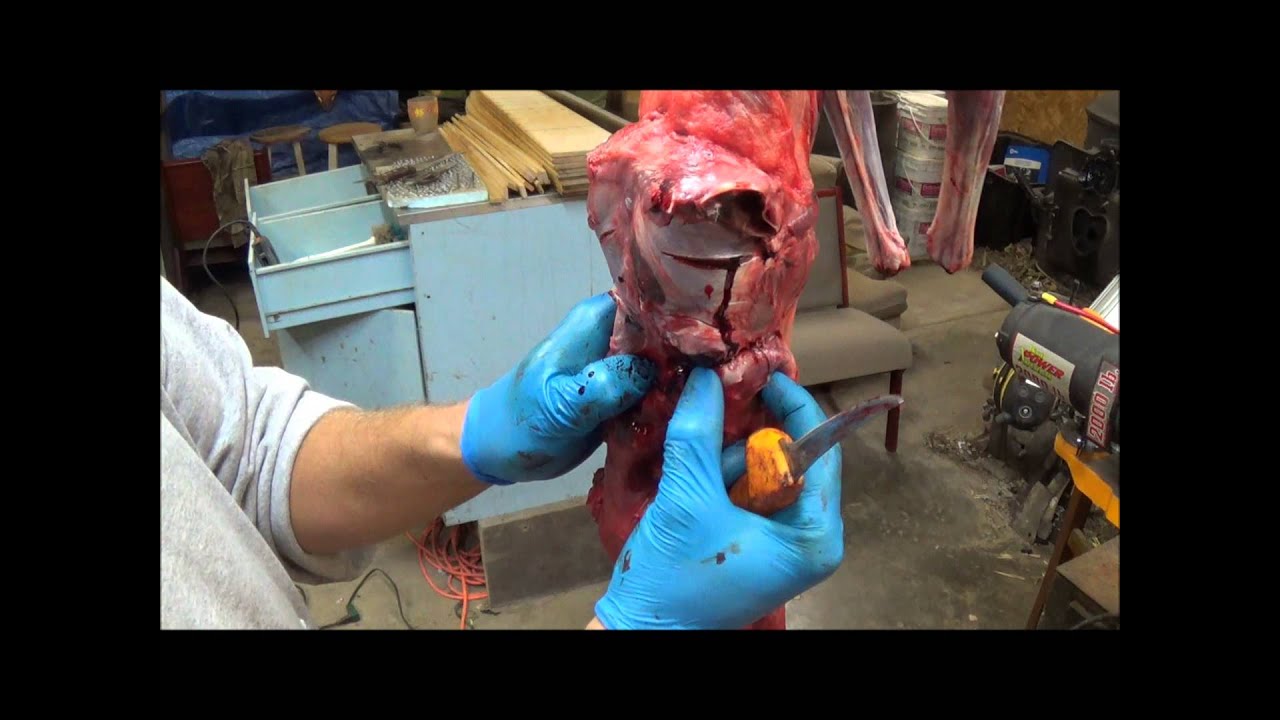 It’ll totally ruin the effect of the hide if you were to decapitate the animal at this point, and if you’re selling them you’ll also want to make sure you remove the face for the maximum value to be gained from the fur.

There’s a large amount of membrane connecting the face to the fur and at this point a razor sharp knife and patience are your friend.

Once you’ve pulled the fur down to the ears you’ll see a couple of bumps. This is the underlying cartridge of the ear and you’ll want to cut through it as close to the top of the fur as possible without damaging it.

The eyes can be found by probing with your fingers, and then you’ll make a cut over them in order to free up the skin. Done properly you’ll even be able to get the lashes, but don’t kick yourself if it takes a few coyote to get the process down.

Cut across the very back of the jaw once you have the hide pulled down far enough. You’ll probably need to probe with your fingers again in order to find the right spot. You can remove the upper lip by bringing your knife along the top of the jaw carefully, following the bone on the upper portion of the jaw.

Remember to only cut in while you’re doing this, rather than downwards. Cutting downwards will damage the hide which isn’t what we’re going for.

The lower lip has pretty much no value, and most hunters will simply remove it. Cut inwards just a bit below where the teeth are showing then come back up and leave the lower lip attached to the carcass for the easiest method to get it out of the way.

Afterwards, simply cut and pull along until you’ve reached the nose cartilage and you can quickly cut the cartilage out which will leave the nose intact on the fur. By preserving the facial features you’re also preserving the most valuable parts of the hide

You’ll also have successfully removed the fur at this point. Don’t be surprised if it takes quite a while the first couple of times.

Now the hide just needs to be cooled down, after which you’ll either need to freeze it or begin the fleshing process immediately.

Taking fur bearing predators is one of the most rewarding activities possible for many hunters. Coyote are particularly tricky prey, both in life and death, and require some special attention. Once you’ve learned how to skin a coyote, however, you’re sure to have some impressive trophies to hang even if you opt to keep them, and if you’re good at it then you can make back most of the money spent on your trip.

How To Bait Coyotes For A Successful Hunt